What is passion? If you Google for it you get results like suffering, strong emotion, enthusiasm. That’s exactly the words I would pick to describe my love and passion for climbing. It has taken me from the steep granite walls of my own Sweden, to snow clad major peaks around the world. Not only does climbing bring me upward, but also forward into who I want to be.

I grew up on the flattest part of Sweden, Skåne, with parents from two different nationalities (Japan and Denmark). None of which were particularly outdoorsy people — even less the kind that would take you on adventures in nature.

As a 14 year old I was a lot at the library. One day I happened upon the book ”Into Thin Air” by Jon Krakauer. That’s where it started. The curiosity and the fascination for mountains and the people who were drawn to expose themselves to the elements atop cliffs and peaks.

Even if I began climbing in my early 20’s, it took a 30th birthday party, two children and a divorce, before the embers of climbing inside of me were properly exposed to air and could flare up to the passion I have today.

The moment I was captivated came when I booked my journey to the southmost part of Russia to ascend Mount Elbrus. The mountain is located in the Caucasus, and is Europe’s tallest mountain.

The trip was unforgettable in a number of ways. I chose to travel alone with an agency that catered to like minded people — people who had passion for nature and mountains. The surroundings were captivating, and it was so remote that there was nothing else to do than just be. Never had I felt so alive and free!

Does the mountains on the cliff only bring pure euphoria though? Far from it! But the thing is — every struggle on the way is worth it.

The next year i traveled down to the Alps to try ascending their queen — namely Mont Blanc. On the way up the mountain my shoes began chafing and I got sick and thought I would throw up many times during the climb. Many times I thought I couldn’t do it anymore — why do this to myself? My body was out of energy since I couldn’t eat properly, either before or during the climb.

On the top I shivered with cold, and still felt terrible. But in spite of everything, I still felt a joy and pride that I had pulled myself together and got to see the sunrise over Matterhorn in the distance.

Back down in Chamonix my thoughts already returned to the mountains — despite me swearing on my knees back on Mont Blanc that I would never again do such a climb.

Where would I go next, and which ascent would I begin prepping for? The answer had already come to me — it had revealed itself in the sunrise… Matterhorn. Matterhorn was the mountain I should have gone to this year, but the Corona situation has delayed that dream. I am hoping September 2021 will be the month I climb that peak I saw in the distance from Mont Blanc.

Climbing the cliffs of my home

To quench the thirst, I am grateful to live on the Swedish West Coast, where we have world class climbing areas. Not only do we have gorgeous and varied climbing in Bohuslän, but the nearness to my home relieves me of long journeys — making it less expensive both for me and the environment.

Cliff climbing, of course, has a lot of similarities with alpine climbing, but it is adventure in a smaller scale, and is much easier available for both me and my children — whom I began introducing to climbing from an early age.

Cliff climbing delivers a different kind of connection to the mountain in more ways than one. I feel the cliff and the granite against my bare hands. The large shoes with crampons, that I need for snowy glaciers, are exchanged for my light climbing shoes, where the feet’s movement becomes precise. Instead of hours upon hours of scaling a mountain, the cliffs gives bite sized chunks of hard training — and still it is a rush of adrenaline.

To me, the cliff climbing also comes with more of a social element. My friends and I can communicate in a different way — give each other tips and encouraging comments as we watch each other tackle a problem.

Socializing and taking breaks away from the cliff is also a valued part of the sport. We have a Swedish fika, chat and nourish friendships, then we return to the cliff, which hopefully has been heated by the sun. We climb and climb, and energized by the fika, we get to the highest heights where the breeze picks up and cools you off.

The fear of falls

People around me have understood how important climbing is for me, but one question keeps surfacing. “Are you not afraid of falling and injuring yourself?” And the answer is yes. Every time. Mostly because of one thing: If I injure myself, I might not be able to continue climbing.

But with a solid climbing partner that you trust, a healthy alertness, and a willingness to dare, but to dare with care, most climbers get away from it without any major injury — except scratches, broken nails, and maybe a finger-joint that needs time in recovery.

After a full day on the cliffs you are exhausted, your feet ache from the tight climbing shoes, your hands and fingers are dirty from the rock and climbing chalk. The outer layer of skin on your fingertips is often chafed, and seldom do I return home without bruises and scratches. But before everything else, I return home with satisfaction and happiness from having done something that means so much to me.

If I climb home in Sweden on a granite cliff, or on a snow covered peak abroad, the feeling is the same — total focus and devotion, a physical and mental challenge, adrenaline, and extraordinary nature experiences. Also, climbing has allowed me to meet wonderful people with the same passion as me.

I have always exercised and been an active person, but never before have I been able to be as much in the now as I am when I climb. There is no space left for anything else than how I move my body to avoid falling, the wind that sounds so different at the heights, and the magical feeling of granite under my bare hands. It makes me feel more home than anywhere else.

Climbing, and the mountains, is my security in life. When everything else around comes crashing down, the mountains still stand there — stable and immovable, waiting for me.

Today, I understand why the people I read about in the books 20 years ago, and despite that, my curiosity and fascination is just as strong. And may it always be! I wish everyone one day could experience the emotion and passion I feel for climbing. 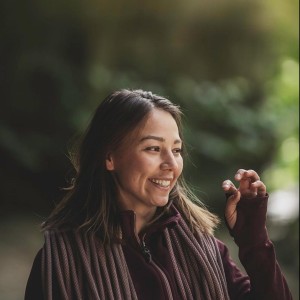 Written by Monica Madsen
Published on September 21, 2020 in People:Passion

Follow
A girl who is born in Nigeria, with a Japanese mother, Danish dad but living in Sweden and needs a lot of climbing and adventure!

A Painter’s Guide to the Galaxy

This Podcast Gets Under Your Skin (By Cutting Your Hair)

Lost in the Mist

Røldal Part I — There, But Not Back Again