Four years old, in my small Norwegian West Coast township, I often put on a vest and played keyboard for my family. My mom has said I would always pretend to be Elton John. Nowadays it’s shoes off and red hat up top — and my name is Aleks Grey.

My grandfather played the accordion, his brother the traditional Norwegian violin, hardingfele. My mom plays the violin, and my father plays piano and sax. Suffice to say, I have always had a lot of music around me.

I grew up in a beautiful, quiet township called Heggjabygda, located near Nordfjordeid on the West Coast of Norway. The size and remoteness of the community meant that I often found myself with a lot of time on my own — time I spent making my own melodies and eventually lyrics.

Aleks Grey is dropping a new single at the release date of this article.

I took piano lessons, taught myself how to play the guitar. I was always singing as well, although not publicly until I was 15 or 16 years old. I was, and still am, shy, but at the same time there is no greater feeling than being on stage.

The size and remoteness of the community meant that I often found myself with a lot of time on my own — time I spent making my own melodies and eventually lyrics.”

When I was 20, I got accepted to the Liverpool Institute for Performing Arts. That same year I started my own solo project under the stage name Aleks Grey.

People always ask, “Oh, Aleks, what’s the story? Does it have anything to do with 50 Shades of Grey?!”

From 2013 to 2016 I lived in Liverpool making music, friends and a lot of good memories, and somewhere along that journey I discovered my sound. As it turned out, it was way more connected to my home and roots than I thought.

Some people roll with the bands and artists they heard at home growing up, but my parents listened to Katie Melua, Gypsy Kings and Dire Straits. Don’t get me wrong, they have some good songs, but it just didn’t click with me when I was in my teens — I was still searching.

Oh man I feel old, thinking back on MTV, TV ads for new CD’s, Absolute Hits, McMusic… That was how I discovered new music. There was no New Music Friday or Discover Weekly.

For my own songwriting I never knew exactly where I was going. Drawn here and there, and inspired by different sources at different times, I meddled in dubstep, folk rock, singer songwriter ballads, house/EDM, jazz and more, but there wasn’t any consistency.

“The more I experimented, the more I realized I wanted to make music with my hands.”

Moving back to Oslo in 2016 I really wanted to make more electronic pop, really “up to date”/ top 20 kind of music. But I quickly found out that I don’t have it in me to become like Martin Garrix, Calvin Harris, Ryan Tedder and those guys.

I always seemed to move towards something more organic. The more I experimented, the more I realized I wanted to make music with “my hands.” Don’t get me wrong, I’m not taking a dig at EDM producers or other producers that only use electronic devices and programming — they can have just as much talent as the next guy.

I just found out it’s not really my sound.

I had to follow the calling back to my roots.

I grew up singing, and playing piano and guitar. It was with these three tools I wrote songs. And I always wrote my lyrics by hand. It was a more analog approach.

Through my explorative journey I’ve found my sweet spot between the modern sound, and modern tools, and connected it with my roots. In my song B.A.B.Y. I wanted a violin solo, performed by my good friend Madelene Berg. It’s pretty unusual for a pop song in the 2020’s to have a violin intro, but that is the personal twist that comes from my roots.

Inspired by the Norwegian mountains and fjords

Most days I do my writing in the studio, but I like the idea of going to my family’s cabin. Well, it’s more like a small hut. A 45 minute walk from our ranch, we have a 200 year old cabin. No power, no water. Just a wood stove and candles. And the idea of being there, with a notebook and an acoustic guitar and still being able to write my music, might be the purest reconnection with my roots.

But I have more ways than one.

To do my best work I need to have the right atmosphere. When the pandemic hit in 2020, I built my own studio together with two mates. We tore down walls, rebuilt, did soundproofing, and painted the place. We call it Pytt Studio. Pytt is the Norwegian word for a puddle. So the Norwegian nature intrudes on the music again.

We built our own studio desk using the top of an old table, combining it with some modern, slender “legs”. At the most we’ve had over 30 plants in the studio. It’s green from the floor till the roof. We even got plants in the ceiling. Most studios I’ve been in are very clean with led lights and black acoustic panels. We’ve gone in the opposite direction.

We get coffee beans from Sognefjord Kaffibrenneri, so every morning we grind beans and put on a fresh pot of coffee. I then sit down by the piano, an old thing from East-Germany. It sounds old and “rusty” but yet it has a certain tone and warmth that I love.

The painter Erik Bergan has painted a puddle (the “pytt”) on one of our walls. So we’ve really made it our own and we’re very happy with that. No matter the weather outside, or whatever is going on in the world, I can always go there and get the same good atmosphere every time.

In August 2021 me and two friends went to Ocean Sound Studio at Giske, just outside Ålesund. This studio is the perfect combination of a world class, up to date studio, with just mesmerizing surroundings.

Together with Iselin Solheim, we wrote two new songs. One song is releasing today (!), the other will follow soon after. I’m also heading to Germany to play my first festival of the year, and when fall hits, I’ll be playing in Oslo.

And as always I will try to find that balance between the modern, electronic music, and blend in sounds from my 100 year old piano and my grandfather’s accordion. 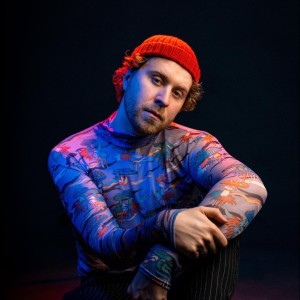 Written by Aleks Grey
Published on June 3, 2022 in People:Passion

Follow
Aleks Grey is a Norwegian pop-artist, hailing from a small town in the west. In 2021 Aleks Grey was listed on major Norwegian radio (NRK P3) as well as airplay on BBC Radio in the UK and German radio. In 2022 he signed a record deal with MTG Music and i soon set to release new music.

Why a Fisherman Beanie Should be Red

Turning a Labour of Love Into a Job

Piles of Gold — New Beanies Out In Store